Trending
You are at:Home»News and Politics»Life for Pot? Yes We DO Give LIFE SENTENCES for Marijuana Offenses! 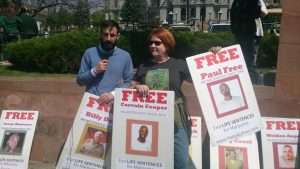 “What country are these men incarcerated in?”

The question posed to activists standing in front of the White House carrying signs calling for the release of prisoners serving life sentences for nonviolent marijuana crimes, or “Life for Pot,” came from a government worker.

The government worker was shocked to learn that the men pictured on the signs, Paul Free, Craig Cesal, John Knock, and others, are all serving LIFE SENTENCES for marijuana right here in the good old USA, and they are not the only ones.

While the country celebrates legalization in Colorado, Washington, Oregon, and Alaska, and marijuana laws are loosening nearly everywhere, it’s estimated that somewhere between 40 to 60 men are serving sentences of life without possibility of parole for nonviolent marijuana crimes.  Many more are serving sentences so long (25 years or more) they constitute de-facto life.  The country’s longest serving marijuana prisoner, 81 year old Antonio Bascaro who has been incarcerated for over 35 years, is one of these. 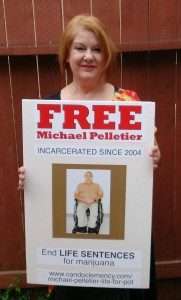 Paraplegic Michael Pelletier is serving Life Without Parole for marijuana.

More often than not, trumped up conspiracy charges are the culprits. To make matters worse, anyone who exercises their Constitutional right to take their case to trial gets sentenced far more harshly than they would had they accepted a plea deal.  Prosecutors want to convict people and they really don’t care who it is, so long as there is a conviction.  In most of these cases, the true “kingpins,” the people in charge, did little to no prison time while people who worked under them are serving life.  So zealous are they in the quest for prosecutorial “wins,” prosecutors even managed to get a man, Michael Pelletier, a paraplegic since the age of 11, sentenced to Life Without Parole for marijuana.  Says Pelletier of the experience, “When a paraplegic or someone confined to a wheelchair is incarcerated, we are confined to our cells.  We can’t work in the kitchen, on the outside crew, in maintenance, etc.  We can’t play basketball, baseball, handball, or any sport.  Our time is twice as hard!  Having a life sentence is a feeling of dying every day. It’s worse than death that happens one time. It’s a living death.”

Lest you think these draconian sentences are a relic of past ignorant reefer madness thinking, know that the practice continues.  James Romans received his federal life sentence in February 2013. Corvain Cooper received a sentence of Life Without Parole for a marijuana conspiracy in 2014.

For these men and others like them, whose sentences offer no possibility of parole, Presidential clemency remains their only hope for the future which otherwise holds death behind bars.