Trending
You are at:Home»Lifestyle»Entertainment»Country Music Legend and Senior Stoner Merle Haggard, Dead at 79 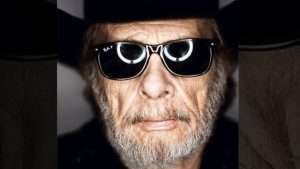 Country music legend and senior stoner Merle Haggard passed away of complications due to pneumonia on April 6, his 79th birthday. Haggard struggled with health issues for much of the last year, canceling a number of tour dates.

Born in 1937 near Bakersfield, California, Haggard  came from a poor family and was a rebellious youth, spending time going in and out of reform schools and later prison. It was during a stint in San Quentin when Haggard began to take music seriously. After his release he became popular around the Bakersfield club scene that launched a long successful career as hard-hitting outlaw country artist.

While his biggest hit, “Okie from Muskogee” begins with the line “We don’t smoke marijuana in Muskogee,” Haggard himself often claimed he smoked cannabis before going on stage. In his later years he became an outspoken proponent. In a 2015 interview with Men’s Journal Haggard stated:

“At the time I wrote “Okie From Muskogee,” I didn’t smoke. It was ’68. I had been brainwashed like most of America about what marijuana would and wouldn’t do. I thought it was responsible for the flower children walking around with their mouths open. It was not so. But if a guy doesn’t learn anything in 50 years, there’s something wrong with him. I’ve learned a lot about it, and America has, too.”

Haggard was inducted into the Country Music Hall of Fame in 1994. In addition to two other Grammy awards, Merle Haggard received a Grammy for lifetime achievement in 2006 as well as a Kennedy Center Honor in 2010.

His last album, Django and Jimmie – a collaborative effort with friend and fellow senior stoner Willie Nelson – debuted at number one on the Billboard charts, and the hit single from that album, It’s all Going to Pot, pays musical homage to everyone’s favorite herb.