Trending
You are at:Home»Lifestyle»Entertainment»Marijuana Movies: Stoner Duos and Trilogies

The world of film has seen many triumphant trilogies including the Lord of the Rings trilogy, the Godfather trilogy, and the Star Wars trilogy. Cannabis enthusiasts on the search for entertaining marijuana movies can chose from two comedic trilogies, both starring pairs of unabashed pot fanatics: 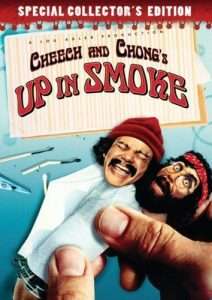 Marijuana Movies: Cheech and Chong’s “Up in Smoke”

The original stoner comedy, Cheech Marin and Tommy Chong’s Up in Smoke is still just as hilarious today as when it came out in 1978. The movie begins with one of the funniest title sequences ever thanks to Cheech’s clown-like physical comedy skills and meanders through a stoned Los Angeles landscape with our heroes, the Martin and Lewis of weed, encountering all manner of misadventures along the way. Of special note is Stacey Keach as the duo’s arch-nemesis Sgt. Stedanko.

The pair’s next film, aptly titled Cheech and Chong’s Next Movie (1980) contains lots of terrific comedic cameos by people who would go on to become stars including Paul Reubens doing an early incarnation of Pee Wee, Michael Winslow, Edie McClurg and Cassandra “Elvira” Peterson.

By the time the third installment, Cheech and Chong’s Nice Dreams (1981), came along, Sgt. Stedanko had become a hard core stoner himself. It was the 80s so there’s lots of cocaine humor mixed in with the weed.

All three titles ramble with sometimes odd and disjointed scenes and all just sort of trail off rather than actually end. While Up In Smoke is unquestionably the best of the three, each one contains enough moments of pure hilarity to make them worthy of a watch. 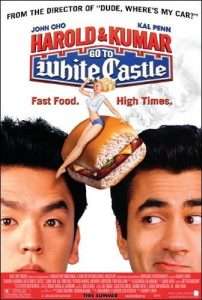 The stoner duo concept got a modern update when Harold (John Cho) and Kumar (Kal Penn) went on a quest to satisfy their marijuana induced munchies in Harold and Kumar Go To White Castle (2004). Expect lowbrow raunchy toilet humor and a weird wandering script. Nonetheless there are some good laughs and creative scenes like Harold’s animated hamburger fantasy set to a hot Latin audio track. Supporting turns by Fred Willard and Neil Patrick Harris round out the fun.

The laughs were sparser in the duo’s second adventure Harold and Kumar Escape from Guantanamo Bay (2008), but you could still find some chuckles.

Sadly, by the time A Very Harold and Kumar Christmas (2011) assaulted our holiday spirit in 3D the franchise had jumped the shark and lost any of its earlier charms.  By our calculations that make Senior Stoners Cheech and Chong, entertainment industry icons with 5 decade-plus long careers that are still going strong, the clear winners in the Marijuana Movies Duos and Trilogies battle.